After the last three days of hard graft its time for the main event  – UFC Fight Night London – Gustafsson vs. Manuwa at O2 Arena. This will be the biggest MMA event that the UK has seen, the O2 sold out 16,000 tickets some time ago such is the demand. The event will be for the first time shown on Channel 5 terrestrial as well as BT sport in the UK, this can only mean good things are in the offing for MMA in the UK.

Over the last three days I’ve been working with MMAPlus ahead of the event this evening. Its been hard work, long days and very tiring, but interesting to see how the pre-production runs and great to meet some of the fighters, film interviews and take a few pictures.

Once again all of the fighters we have met and interviewed have been absolute stars, all gentlemen and all very accommodating to the media people. Its been lovely to meet some people whom I normally only chat to on Facebook or Twitter and to reacquaint myself with others who I cross paths with only occasionally.

Luke Barnatt Mr Big Slow as always gave a great interview, the guy really has his head screwed on and understands the business side of things, he’s someone I really like in the industry, a great sense of humor and drive for being the best he can. 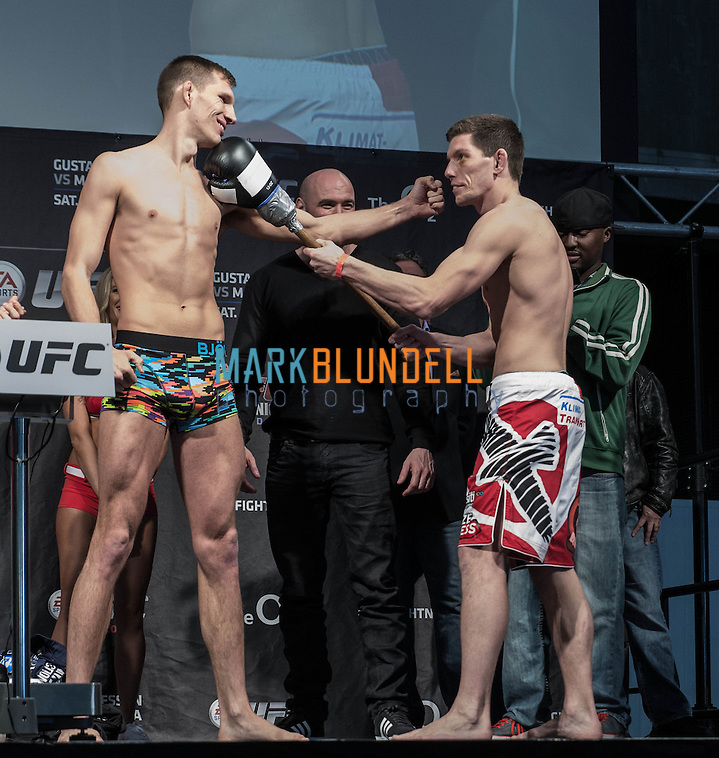 I can’t really pick out one highlight moment, however our interview with Melvin Guillard was interesting, he didn’t hold back and came across very well indeed showing a ;lot of personality. I really like the guy. Also his conversation with regard to Ross Pearson rematch was interesting, saying that there was possible judging bias in the initial fight (3.45 into the video) and that Ross hadn’t been asking him for another crack at the whip. Ross on the other hand said earlier that he was up for another fight and that Melvin was up for it too only an hour or so prior to this. Someone clearly isn’t saying the exact truth, however the census was that the rematch would take place in Berlin on 31 May.

Another great interview is our chart with Forrest Griffin, we managed to catch him on the couch in the hotel and grabbed some great insight into his life as the winner of TUF #1 way back in January of 2005. He’s a really entertaining fella, outgoing and a total gent with a bit of a comical streak.

Friday as always was weigh-ins – everyone made weight and pleased the crowds. The Q and A was great as well with Forrest once again being cheeky and looking at home on the sage equally so Conor McGregor, the old and new taking their place. From a media perspective Conor has it totally nailed, always happy and always willing to appease the fans. Joining thee pair was Ross Pearson and Jo Calderwood, the latter still getting used to the media attention. Hopefully she will acquit herself well in The Ultimate Fighter 20 house.

As for the main event at UFC London Fight Night – Gustafsson vs. Manuwa,  the question everyone is asking – who will win – Gustafsson or Manuwa? When Jimi took his shirt off for the weigh-in there was a gasp from the assembled crowd as if to say – look at him he’s MASSIVE’ – UFC President Dana White in the post weigh-in scrum said that “Manuwa was in the best shape of his life”. The fight has comparison to that of the earlier bout between Gus and Jones, the former coming in aas the underdog with nothing to loose and everything to gain. This time the tables are turned. Jimi could well cause an upset. 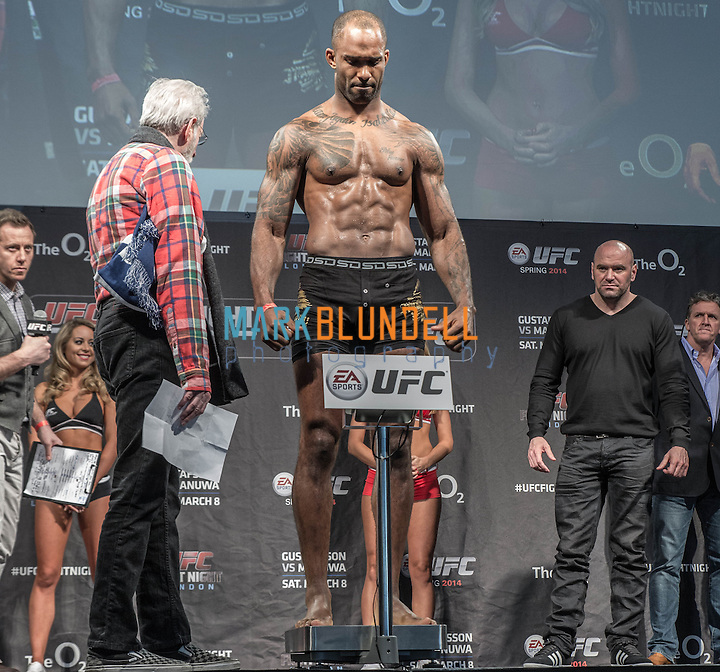 Comapred to Alex’s taller and more rangy In my opinion Gus seems to have the upper hand having gone the distance with Jon ‘Bones’ Jones and being the first person to take him down. however having witnessed Manuwa in training both striking at his home gym and grappling at Nova Forca with Ricardo da Silva I really believe that he has a good chance of taking the victory. I’m sure that Manuwa will try to keep the fight standing to use is massive hitting power, Gus will try to take it to the ground and submit his opponent. The betting odds are stacked in favor of the Swedish fighter and odds on the fight going the distance are high. My money is however going on a Manuwa win via KO or TKO in the second round.

The overwhelming feeling that I got from all the people that we spoke to was however that the fighters all really enjoy what they do – sanctioned violence. They know what they are getting into and know that they have a chance to win, even the big underdogs. Fighting is they’re job and they all really enjoy it. Who would rightly go to work in a role which involved getting hit in the face if it wasn’t fun.

I wish each and everyone of them the best of luck for this evening, lets hope that all of the fights go down in an honorable fashion and that there are no major injuries.

The full Gallery will be going up here :