UFC Fight Night Gustafsson vs. Manuwa fight day was upon us yesterday and to say I was excited was an understatement. Ive never been to an arena of the sixe of the O2 for any event let alone for a fight night so i was expecting good things. Once checked in I casually took a look at my pass to see….. CAGESIDE. Awesome. This was my first UFC event in the UK and I wasnt really sure what to expect. In Sweden I was up in the cheap seats so had a very different experience. 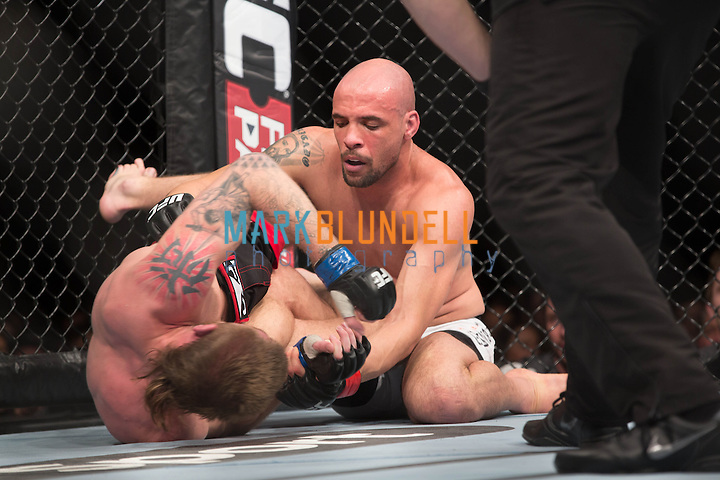 This was very slick, quality media room, catering and all mod cons. Luckily another photographer who Id came across before (Steve Mitchell) was there so sort of took me under his wing a little. Walking out into the arena was immense. I was trying hard to be Mr Cool I must admit. I’ve done MMA photography often enough to know the ropes so wasn’t too phased by it to be honest, kit ready and we’re off. 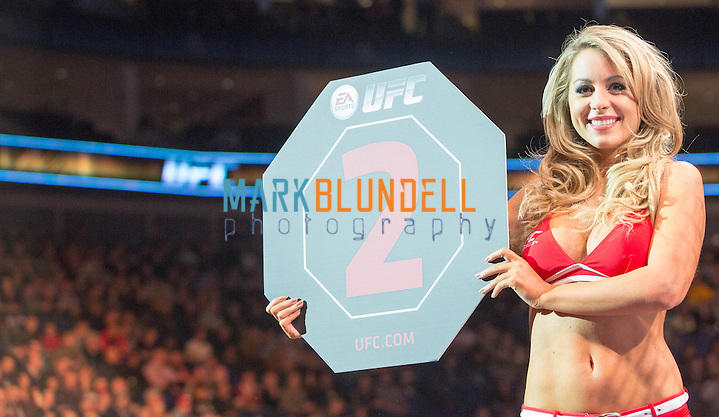 We’d spent a lot of time with the fighters and despite not knowing the majority of them at the run up to te event after carrying out interviews I felt that I had some small insight into their psyche. It was great to see the jovial guys with whom we’d chatted only the day before enter the arena with their work face on ready to do battle. I particularly warmed to Louis Guadinot, with his flamboyant dress sense and green hair and despite his opponent being British and from GymO1 in Portsmouth I was sort of rooting for him and cast a smile when he sunk in a deep choke causing Harris to tap in the first, there was nothing the Englishman could do. 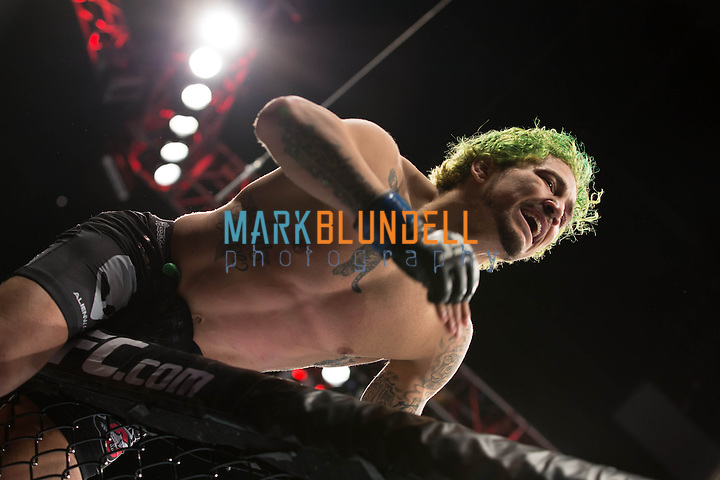 Of course Cambridge man Luke Barnatt was on form, and managed to gain a win over Mats Nilsson towards the end of the first, the result expected . Luke for me is one of the nicest guys I’ve met in the game, I’ve said it before and I’ll say it again, he has his head screwed on, for him its business. I’d previously discussed with my buddies in the week about the relatively short shelf-life of a fighter and Luke is doing everything right to maximize his exposure within the sport, he’s intelligent, articulate and also quite humble, all superb qualities to have. I’d really like to do a proper photoshoot with the guy too. 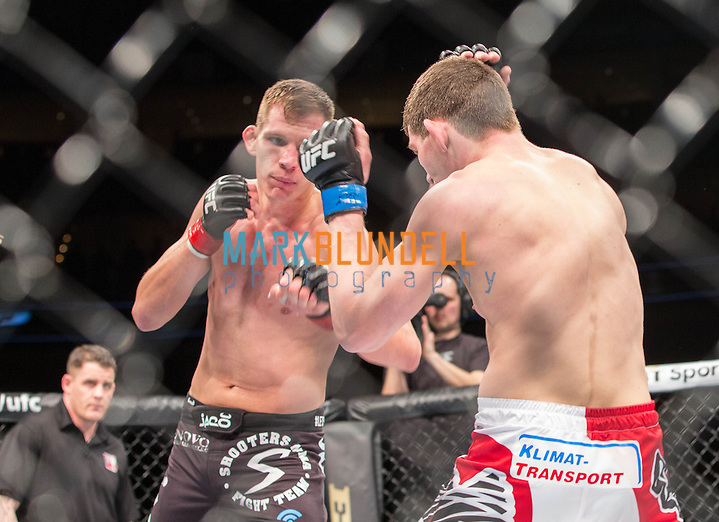 Pickett vs. Seery was a great bout, both giving their all from the start. Brad is one tough cookie and always puts on a great display, however credit where it’s due, the Irishman put up a good fight and despite being the underdog too the fight the distance only for Pickett to get the nod from the judges. It was the expected result, however not many thought that the fight would go the distance. I see a bright future for 2Tap in the division despite his defeat and given that he took the fight on short notice the Londoner made hard work of the night.

There have been suggestions that the pair should have gained Fight of the Night for there bout, however with neither fighter finishing his opponent I can see why the main event got the nod. With recent changes in the bonus award structure the UFC is pushing for finishes and exciting fights from competitors, not a decision from the referee or judges. 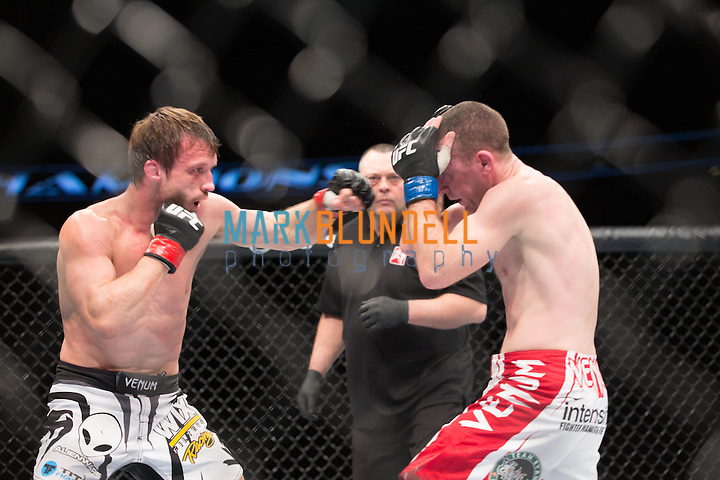 The biggest letdown of the night for me was Melvin Guillard vs Michael Johnson. We’d spent time with Guillard during the week, he came across well, a little cocky, but in a good way, not being afraid to tell it how it was. Exclaiming that his previous and supposed opponent Ross ‘The Real Deal’ Pearson wouldn’t accept a rematch after their previous bout was ended early. He spent the entire three rounds back peddling trying to avoid a confrontation. Possibly both of the fighters were aware of each other’s explosive power and timing consequently nullifying any chance of combat. The rematch between Guillard and Pearson was slated for the Berlin outing on May 31st, however after this result, that might not come off. 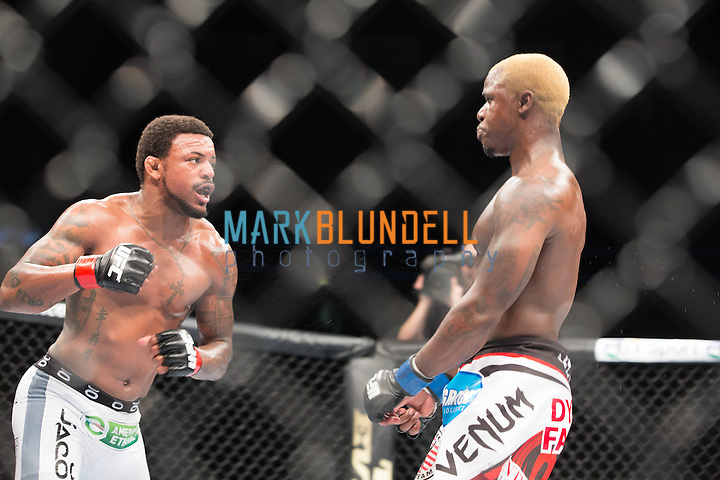 Jimi Manuwa cut a forlorn figure when he entered the press conf after the show, I can imagine that he would have felt more comfortable in any other place than having the cameras on him. He really had no need to be down though, despite his defeat I felt that he acquitted himself well having fought the worlds number two. I’m sure that his pride is dented, however he still retains the lions pride and I have no doubt he’ll be back. 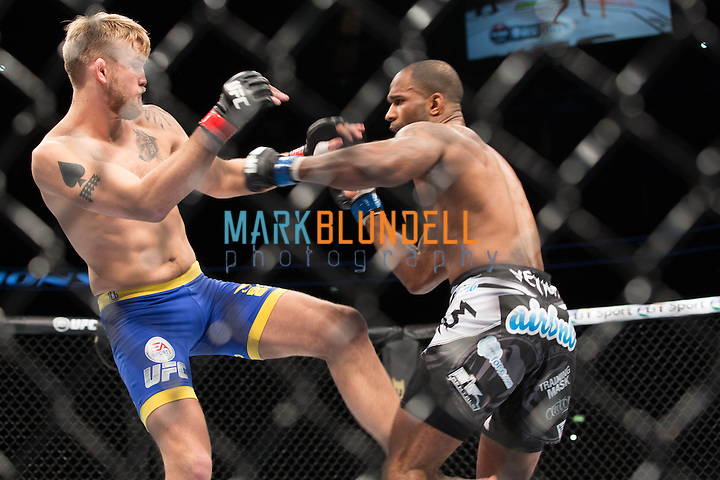 Although Manuwa spent a good deal of time on his back during the first Gustafsson was unable to capitalise on this just tiring the Croydon mans left arm, in fact Manuwa was able to escape from the ground position and get back to how feet to stand and trade once again.

So what’s next for the pair? I have no idea where Jimi will end up after his defeat, another top ten opponent hopefully possibly in the US. Jimi will have to get his skates on though, at 34 there will be a lot of up an comers snapping at his heels in the coming years. Let’s not forget that Gustafsson was also beaten by Phil Davis in UFC 112 however the Swede will undoubtedly face the victor of the Jon Jones vs. Glover Texeira fight at UFC 172 in Baltimore.

With every loss there is a win, Jimi has a great team around him and they will take positives from the performance to ensure the same doesn’t happen again. Dana White in the post fight interview mentioned that he may take Manuwa overseas to fight next time. The quiet man will be given another chance to roar and be the pride of the country. In addition Jimi said that he would really like to remain with Gustafsson, a prospect which the Swede accepted and I think would welcome, who better to learn from than the man that just beaten you, again the fighters showing the respect that they have done since the fight was announced.

I hope that Manuwa can take a lot from the experience of being top of the card, from being thrown into the limelight, doing press appearances which he clearly wasn’t comfortable with at first to dealing with such a big platform on which to perform. This really was two steps forward and one back for him, however Jimi is by no means back where he stareted and proved that he can handle the big stage and all that it entails. 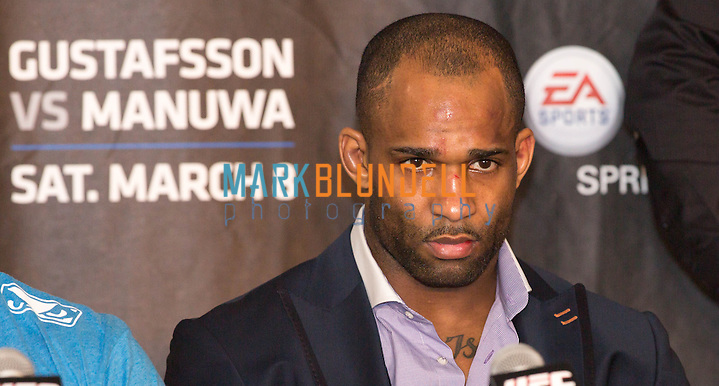 A favorable home show in Sweden was quashed by the UFC president Dana White during the post fight press conference due to time difference with the pay per view audience on the natural home soil of the UFC in the US. This is a shame as it would be a great coup for Garry Cook The EMEA boss. White did however say that he thought it wholly possible to have a title fight in Europe at some point. Previously in the week he had also mentioned that there were no plans to have a two tier structure with EMEA playing second fiddle to the States ensuring that the talent is spread around the world. In my opinion this is a great decision, one heat may see a home grown undercard with the main card populated as it should be.

My overall impression if the event was a great one. Some of the staff had been extremely helpful all week, we played but he rules and hey helped us out with interviews and fighter access. As always fight night was great and gave me an insight into the media side of things, the reporters rushing back and forth after fights for interviews in the stacked media room, mikes thrust Towards faces of the ecstatic winners and saddened losers who would probably rather be anywhere else. 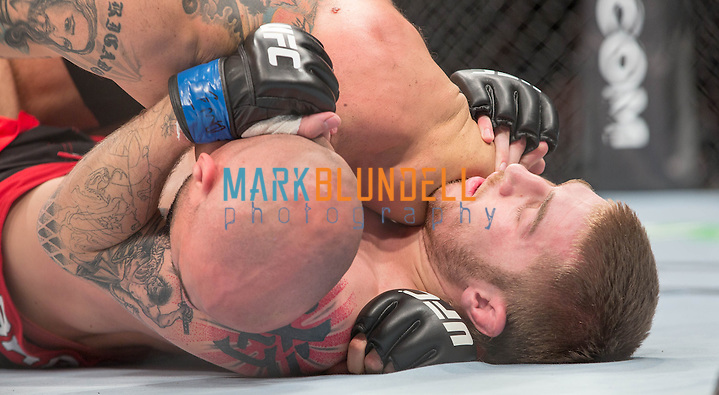 From a photography perspective UFC Fight Night Gustafsson vs. Manuwa was an absolute dream to work on. The lights were bright allowing for fast exposure and although there was a large apron around the cage, we had plenty of room to move to get some great shots. I’m very happy with my images from the event and although not quite up there with the very best, I’m gaining and learning with each outing still trying to cement myself towards the top of the pile. I’m still very much second division compared to some of the pros, but looking for promotion this season.

That wrapped a hectic week for me and the team working with MMAPLUS. Next week we’re down to earth with another event at the O2, this time at the smaller IndigO2. We have to keep it real and support grass roots as much as the big shows.

* note I am a photographer not a writer or journo so please appreciate the copy bay be a bit poor!