Manor House B – Enjoy the Silence

This weekend we made a trip fairly far afield. After seeing a contacts images of this location I was keen to go and check it out. We heard that it was due for demo, so I decided that better go sooner rather than later, otherwise I’d only kick myself afterwords for missing such a treat. We had four or five locations lined up, all with varying degrees of intel / access / snooping locals. This was my prime target.

Entry took a small amount of time to find. We must remember to look both down as well as up for access at all locations, especially the older ones. Torches at the ready we ventured into the cellars and found a way in.

This was the shot that I went for – I knew that there was an organ in house, so was keen to find it. As there were two of us we split up. I took the upper floors, Viveca the lower. It works well like this both able to get on with our own thing whilst not disturbing the other, getting in the way etc. It also helps with original images, we don’t line up and see what the other is doing and copy the shot.

This is by far the most rotten location I have been to – there are floors missing, and floors on the verge of being missing. From the kitchen, the view stretched three floors to the roof – there will be more of this during the week.

I wanted to process this with a vintage feel, a sort of faded seventies look. I’m not really sure that I’ve pulled it off how I had initially imagined, but I really like how the processing has come out. I’ve also used a faint overlay of the wall from one of the other rooms to give a bit of a dirty textured feel. 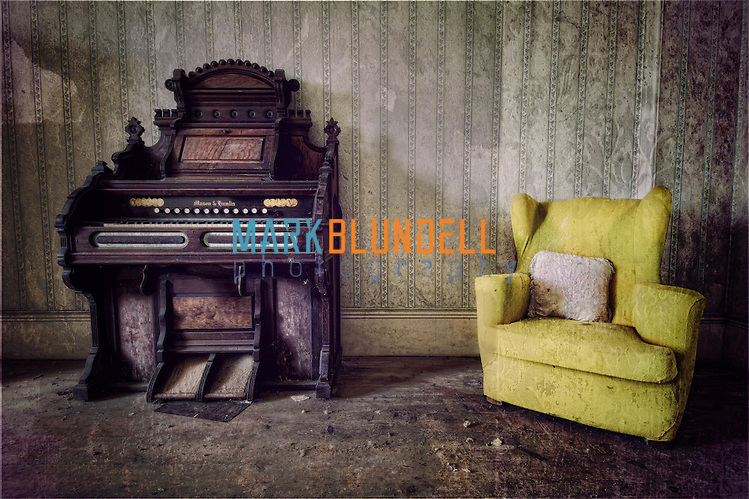