I’ve been wanting to do this location pretty much since I got into urbex, it’s right on my doorstep – within walking distance in fact.

Crystal Palace is so named after the iron and glass structure that was originally built in Hyde Park was moved here in 1854 after The Great Exhibition of 1851.  A train station was built and was known as Crystal Palace High Level Station. In 1936 there was a fire that destroyed the palace and over the years the area fell into disrepair. The station remained until 1954 when it was finally closed down. The footings and some of the ornamental sphinx still remain along with the terraces of what would once have been a magnificent structure.

The high level station area that you see below was the VIP or first class entrance into the palace itself. It was designed by Edward Barry and gives the impression of a Byzantine crypt. 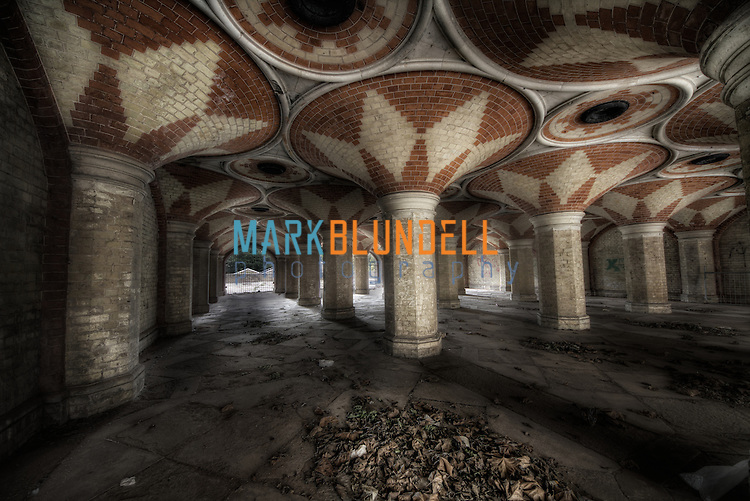 This is actually under one of the main roads, the entrance under one side recently cleaned but generally locked, the other side is fenced and gated with access being rather perilous. Being the inquisitive type I’ve always looked through the fence and wondered ‘what was down there’. After a little research I found some history and images which made me all the more convinced that I had to go on a quest.Last week I climbed the spiky fence but was defeated by gates. However I did notice that there was light (at the end of the tunnel) so crossed the road and found a nice easy access. Unfortunately there was a guy asleep in there. so i decided to let him be and return at another time in the hope that the gates weren’t locked.

This weekend I made another attempt midday hoping that the guy was gone and he was. I managed to get some good shots, its pretty small so only so much one can shoot. However I was really happy with the outcome and glad to have been the first to shoot here for what seems to be a very long time.

Click the image for larger versions and the rest of the gallery.

More information about Crystal Palace can be found HERE and HERE