I’ve been thinking that I might write something slightly controversial regarding the Urbex mantra- ‘Take only pictures, leave only footprints’ over the last few days so here goes. I think I’ll be doing two posts, one a counter argument to the other.

Urbex is the exploration of abandoned buildings or locations of one sort or another, by its very meaning the locations are abandoned – not inhabited and mostly with little maintenance or care taken of them. Owners vacated  poorly shoring up the security. Often these places are quite literally a walk in. In the UK this is classed as trespass, its a civil offence, meaning that the owner has to catch you and prove that damage was caused, hence not going to these places ‘tooled up’, but taking advantage of broken windows, doors or tunnels.

If the location is easy to get into one would surmise that the owner does not care or cannot afford to defend the property correctly. Often the places are earmarked for demolition (as is the case of two well known asylums in the South of England). One  would hope that all items of value, historical, emotional or personal attachment had been removed, this is not always the case though. I have come across personal letters and medical records, even x-rays with nanes and a toe tag at a mortuary.

What’s to stop the UE enthusiast taking a memento of a visit? The owner can’t care about them, if the did they would have been removed or secured. This is of course theft – a criminal offence – totally different to being caught solely taking pictures. If the explorer takes a picture, book, magazine or letter, something of little material value is it really so bad?

If items are taken they will be preserved, all be it in a dislocated ‘urbex collection’ and it gives the explorer a small trophy, something to remember the trip by and possibly a piece of history that may only ever bee seen in a glass case in a museum.

Of course if everyone were to take something from a location there would be nothing left for others to find. This for me is one of the best parts of UE. On a recent trip we found maths books and magazines from a broken trunk, obviously once owned by a very intelligent child. These were dated from around 60 years ago – during the Second World War. aeroplane spotting guides and a hand written list of planes the child had seen locally (this was in an area of many air fields of that time). It certainly gave a sense of personality to the location. I could imagine the child running out to see the fighters and bombers when he heard the engines rumbling in the distance either going out on raids or limping home after action with the German defences. Maybe he counted them out and counted them in and was sad to find that not all returned?

If no one takes these they will be destined to end up as rubble and the record gone forever.

So should we take these things?  maybe try to find out the owner and reunite them, or leave them for the next person? 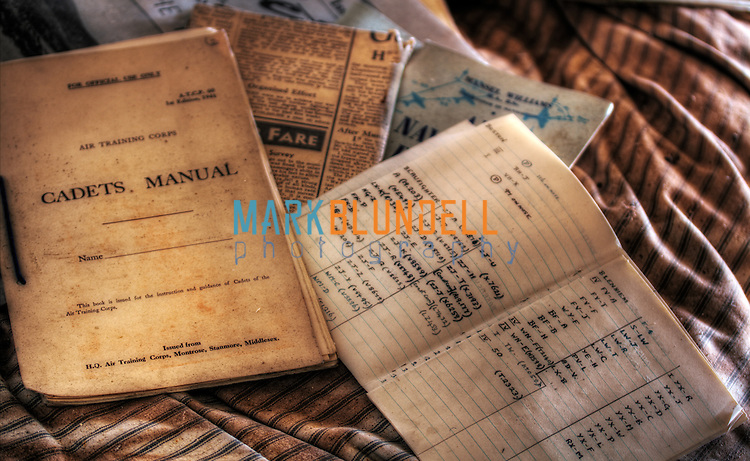